The People's Streets: Stand with the Cuban Revolution!

In March of 2020, a little while before we all began to appreciate the gravity of the Covid-19 pandemic, I stopped by the South Cloisters at University College London (UCL) to attend a discussion about "imperialism and anti-imperialism". The talk was hosted by a group of students calling themselves Liberate the University, who had come together in order to express their support for the strike being waged at the time by the Universities and Colleges Union and have since done some admirable work promoting rent strikes and resisting the damaging intrusion of the market into higher education. It was attended by people with a range of views, among them some activists from the so-called Alliance for Workers' Liberty (AWL) who felt it an appropriate occasion to label Cuba, which has been a recipient of aggression on the part of the world's foremost imperialist power for decades, a "Stalinist dictatorship" whose trade unions were "shills of the State" and which had "oppressed the long-suffering people", in spite of a few advances in healthcare and education which the speaker barely felt worth mentioning.

In the last few days, the AWL activist's position on Cuba has been echoed by people like Senator Marco Rubio, Governor Ron DeSantis, Fox News and other stalwart hawks of the imperialist regime in the United States. The outpouring of contempt and vitriol directed at Cuba's 'communist dictatorship' has been renewed, this time, by a handful of small protests in the capital, Havana, and other cities. Initially sparked by concerns about persistent power outages as well as shortages of basic supplies such as food, fuel & medicine in the small town of San Antonio de los Banos, the protests were quickly co-opted by opponents of the revolutionary government, using the hashtag #SOSCuba. The country's President, Miguel Diaz-Canel, who succeeded Raul Castro in 2019, accused press and social media platforms based in the United States of attempting to orchestrate a campaign of violent unrest, a claim which appears legitimate in light of successive US administrations' well-documented history of using popular forms of media such as radio stations and social networks to destabilise governments who oppose its geopolitical interests. However, acknowledging that the people were sincerely concerned about the growing shortages and the pressure which the Covid-19 pandemic has placed on Cuba's healthcare system, President Diaz-Canel also travelled to San Antonio de los Banos in order to speak with the protesters, and it was from there that he called the country's revolutionaries to the streets.

The people of Cuba, as well as the international community of workers and trade unionists who recognise in the country's socialist system their own aspirations to be free of the repressive power of private capital & the obscene oligarchs it creates, responded in force. Counter-protests across the island dwarfed the original demonstrations, the largest of which was thought to have gathered only around a thousand people.
Meanwhile, many commentators have pointed to the absurd - almost dystopian - hypocrisy of US President Joe Biden's opinion on the matter. In a statement issued on Monday, July 12th, the White House stated "The Cuban people are bravely asserting fundamental and universal rights. Those rights, including the right of peaceful protest and the right to freely determine their own future, must be respected." Jacob Silverman points out how "transparently ridiculous" such a statement must sound to anyone familiar with the footage of a staggering number of extrajudicial murders and the brutal suppression of peaceful protests by American police which has circulated across much of the world for several years, while others have drawn attention to the fact that most of the economic woes which were the foremost cause of the first protests are the consequences of a 60+ year trade embargo, tightened under the reign of Trump, which President Biden has refused to lift or ease (even syringes with which to administer doses of the Covid vaccines cannot be imported in adequate numbers), in spite of promises made during the election cycle. The Communist Party of Greece, in an official statement on the events in Cuba, opines that Biden's position has revealed the collapse of hopes for a more progressive government than that of his predecessor, while Jorge Martin, highlighting the hypocrisy of the White House, says "[I] could not imagine a greater degree of cynicism. The same powers that apply a blockade against Cuba, which prevent it from trading on the world market, from purchasing medicines [or] supplies to manufacture them, are now demanding that the Cuban government open a 'humanitarian corridor'!"
Since overthrowing the horrific dictatorship of Fulgencio Batista in 1959, socialist Cuba has been a persistent thorn in the side of the colossal United States. Indeed, it is hardly surprising that a country in which no changes to policy in local workplaces, nor any new labour legislation at a national level, can be introduced without the approval of popular and active trade unions; which is able to boast a healthcare system that's given it a lower infant mortality rate than that of the US and is able to send brigades of internationalist doctors to any part of the world, including developed countries, when the need is there and which has built an educational apparatus that has afforded it the highest literacy rate in the Americas, is considered a serious problem by the ruling class of the US. The American bourgeoisie, and the descendants of Cuba's plantation owners & torturers employed by Batista's military who, from Miami, serve as their mouthpiece, would have preferred it to remain a poverty-stricken, underdeveloped neo-colony useful only as a source of cheap labour and tourist attractions. It is no wonder that Fidel Castro, before passing away from natural causes, was the target of hundreds of assassination attempts by US military and intelligence agencies in the course of his life.
What is surprising, and truly repugnant, however, is the lack of solidarity from some of those who call themselves 'socialists'. Whether it be Trotskyists, so-called 'Orthodox Marxists' or 'Democratic Socialists', it is staggering to see such people remaining silent or, worse, aligning themselves with those demanding the fall of the government and 'humanitarian intervention', even after the lessons of Yugoslavia, Iraq, Libya, and so on endlessly. It's truly astounding to see them still giving credence to talking points popularised by the very worst among the apparatchiks of the capitalist monster, throwing epithets like "Stalinist" and "tyrant" and "degenerate bureaucracy" around when the clear demand of the moment is unconditional solidarity with the masses of the Cuban people who, in spite of enduring the same hardships and shortages as the protesters, know, when talk turns to action, that their safety and genuine human rights lie with the Communist Party and the political system it has constructed. In this way, Cuba is something of a litmus test for anyone who stands for self-determination, solidarity, workers' power and liberation from the tyranny of capital. One's politics is not assuredly sound if one supports Cuba, but it is assuredly repugnant if one doesn't. The response of every socialist, of every shade, to the fervent efforts of the predatory imperialists to undermine the sovereignty Cubans find in socialism, therefore, can only ever be:
Long Live the Revolution!
Long Live the Communist Party of Cuba!
Down with the Gusanos and Interventionists!
Stand with the Cuban Revolution, No Excuses, No Exceptions!

Popular posts from this blog

The Life and Thought of the Indomitable Dr Marx: An Outline 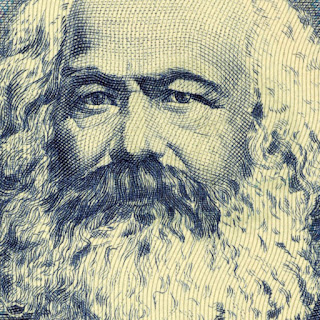 “On the 14 th of March, at a quarter to three in the afternoon” said Engels , standing over the grave of his indomitable friend, “the greatest living thinker ceased to think”. Just a few old comrades  came to see Karl Marx, or ‘Mohr’ as his daughters called him, buried at Highgate Cemetery in the spring of 1883. He’d passed away in a chair by the fireside with pictures of his late father, wife and daughter in his coat pocket. Engels laid them in the coffin as he said goodbye to “the best hated and most calumniated man of his time”. It was a quiet end to a tumultuous and often tragic life, a life which, though it may not have seemed so at the time, transformed the world. Marx was born in the quaint Rhineland town of Trier on the 5 th of May, 1818. His family was comfortable and enjoyed some measure of respect, though it was not counted among the pillars of local society because of its long rabbinical heritage, which separated it from the community of middle class Christian profess
Read more

The Enigmatic Analyst: Scattered Notes on Lacan and Politics 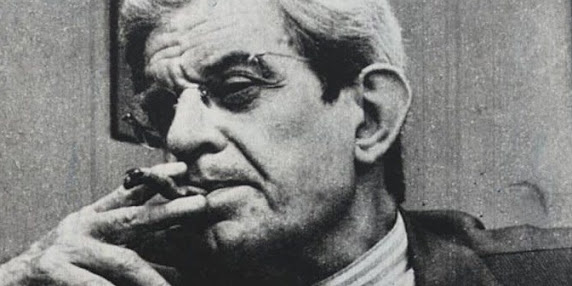 Jacques Lacan, circa 1968 On the 13th of April, 1901, Jacques Lacan, the most original and controversial psychoanalyst since Freud, was born in Paris. His family was ardently Catholic, but Lacan himself lost faith after reading Spinoza, a thinker with whom he would compare himself decades later after suffering expulsion by the French Psychoanalytic Society, which  he'd founded  in the late 1940s to oppose the increasing predominance of the medical model of psychological healthcare imported from Britain and America in the practice of psychoanalysis on the continent. The Society removed him from its list of training analysts in 1963 as the condition of its acceptance into the International Psychoanalytic Association. The issue was apparently Lacan's use of variable-length sessions with his patients - whom Lacanians call 'analysands' in order to problematise the power dynamic between pathologised patient and 'stable' doctor - so as to facilitate the flow of the
Read more

The Paris Commune: Another World (Part One) 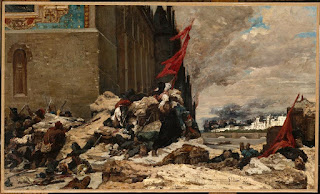 Part One of Two. Find Part Two Here It was still early when the soldiers arrived. They came to Paris with a simple order – confiscate the cannons, paid for by subscriptions from the citizens of the capital and held by their militia, the National Guard. The columns of troops marched into the city under the watchful eyes of their Napoleonic officers, men like Claude Lecomte and Jacques Clement Thomas, meeting little resistance, encountering little of anything except one brave sentry. “All was silent and deserted” wrote Lissagaray in the first influential account of those days. The cannons were quickly found, the most important areas occupied but, in its certitude, the government had forgotten to assign horses to haul away the spoils. As the commanders scrambled to find them, the sun appeared and the shops started to open, bringing the people onto the streets. “The women were the first to act” Lissagaray writes, for they, “hardened by the siege…did not wait for the men”. More and more of
Read more

Kyle Thomas
The mind is not a vessel to be filled but a fire to be kindled.

The Life and Thought of the Indomitable Dr Marx: An Outline

The Enigmatic Analyst: Scattered Notes on Lacan and Politics

The Paris Commune: Another World (Part One)